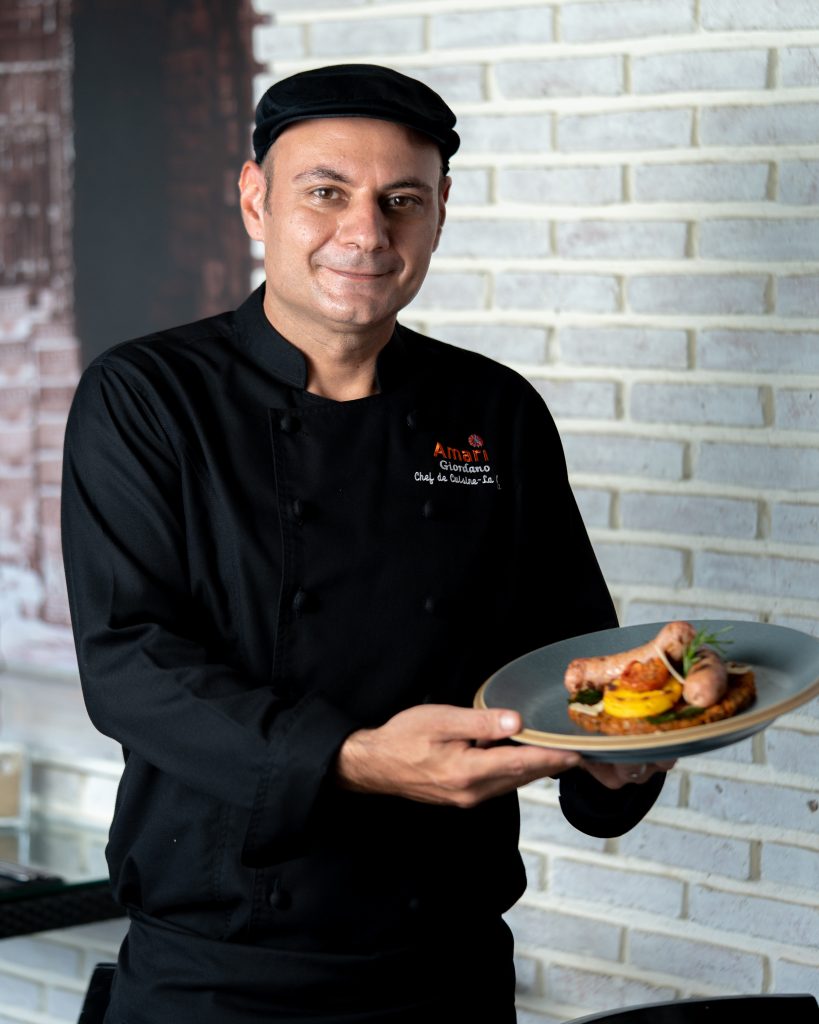 Anyone who witnessed the growth of Italian cuisine in Phuket during the 2010s would remember the iconic restaurant La Gritta and its authentic cuisine, traditional menus, personalised service and friendliness touched diners’ hearts.

Giordano Roscini, 40, formerly in charge of Alberto’s Pizzeria & Trattoria in Bangkok, is the new Chef de Cuisine of La Gritta at Amari Phuket. Roscini is a native of Amelia, Umbria – one of the most ancient towns in central Italy famed for its rolling green mountains, hearty food and robust wine.

Roscini will introduce new menus and elevate La Gritta’s traditional cuisine with modern culinary techniques honed from his years at the one Michelin star Casa Batavia in London. He’s well-versed in picking the freshest and seasonal ingredients for special menus and sticks to his farm-to-table traditions gleaned from his formative years working in Umbria’s farm hotels.

“I’m looking to bring high-quality ingredients to create menus from many regions. I will focus on unique and authentic recipes, such as introducing the region of Sicilia because the food there is a little different from all the other parts of Italy,” Roscini said. “In Italy, the best cold cuts and cheeses are there – all with a variety. I will bring them from Italy to share with all my guests.”

Roscini has been cooking since age ten. He found his passion for food when he started to cook for himself. At age 15, his culinary career took off after successfully running the culinary options for the Anita Hotel and the upmarket agriculturist restaurant at Agriturismo Piana Dele Selve Resort in Umbria.

“As an Italian, my favourite dish is fresh, homemade pasta,” Roscini reminisces. “We have many kinds: dried, fresh or baked. We can make a full meal. Normally in Italy, lunchtime is a pasta meal. Our people like it because it’s not too early but provide a fulfilling feeling and energy.”

For the past 20 years, Roscini has been working in Thailand and moving to Phuket was happenstance – an unplanned move that had unexpected but pleasant ramifications for his lifelong culinary journey.

“I chose to move to Thailand because my older brother was already working in Thailand,” Roscini said. “He was a Food and Beverage Manager, and I joined him to lead the culinary team in an upscale Italian restaurant he opened.”

Roscini feels like he’s a part of Phuket. The island’s paradise setting, he said, inspires the food he cooks at La Gritta. “We have a fantastic restaurant with a beautiful view. The food must also be beautiful, authentic, and prepared. Guests can expect to feel like they’re in Italy and forget they are in Phuket. I will recreate the perfect dining atmosphere and flavours following Italy’s traditions.”

A true journey for the senses continues with the secluded La Gritta Bar, an upscale bar famed for picturesque views of Patong Bay, enticing guests with authentic, Italian-inspired crafted cocktails and a discerning Italian wine list. Look forward to an evening of gorgeous sunsets while sipping drinks made from quality ingredients to capture Italy’s essence.